It’s that time of the year again! Lagos, Nigeria will be buzzing and you want to do as much as you can possibly do! As usual, we’re here with the definitive event guide you’ll need to have a true detty december in Lagos, Nigeria.

The 4-man band is bringing their advanced live performing techniques to Lagos for one night and one night only in December.

Budget: Regular tickets are selling for N5000 while VIP tickets go for N10000

A 3 day festival with performers from South America and the Caribbean to promote African heritage and culture.

A child friendly day concert on the school grounds with a line up of freshmen.

Cardi B at the Livespot X Festival

The Frankincense Concert & Awards Ball at the Lagos Continental Hotel

A barbecue in the daytime shall morph into Blaqbonez’s first headline concert in Lagos.

Budget: Regular Tickets are going at N1500 and VIP Tickets are available at N3500. Available here.

The platform for upcoming artists celebrates its 3rd anniversary. Blaqbonez, Terri, Ckay, Oxlade, GoodGirl LA and others are billed to perform.

Mayorkun hosts his first pop-up shop in Lagos as part of his inaugural edition of The Mayor of Lagos Festival.

Budget: Free Entry. Tees which will be cheapest will probably start at about N8000.

Register for QFest 2019 today, to participate in the festival Open Mic competition. Don’t miss out on this opportunity to showcase your skills! Spread the word. Join the conversation #QFest2019. . Send an email to register for the festival today. Complete your registration by 7 December, and get an Earlybird discount! . #QuramoWritersPrize #QWP2019 #LiteraryFestival #WritersPrize #QuramoPublishing #QuramoProductions #Quramo #LiteraryEnthusiasts #LagosLiteraryEvents

Jesse Jagz and his new band, Garbaga and the 1984’s take us through a journey of carefully curated music from the past and a preview of what the future holds.

Count down to Nigeria’s biggest and littest concert! Hennessy Artistry is pouring one for its 10th Anniversary with a stellar line up. #HArtistry10 #HennessyArtistry

Budget: None. It’s invite only so hit up your plugs or just stay on the lookout for a giveaway from your fave media platform.

Third edition of the Lagos Urban Fashion Show and would feature the best streetwear and emerging designers in Nigeria.

The Mayor of Lagos Concert at Muri Okunola Park

The Mayor Of Lagos concert in 2018 was an amazing experience! Let’s do this again.. same date – Dec 14th! Muri Okunola Park! Tickets are selling – www.tmolfest.com

You already know there’s no way Mayorkun isn’t delivering a headline show in Lagos! He owns the city and you can bet he’ll bring all his friends out!

Budget: All tickets are priced at N2000 and available here.

Hit your plugs up real quick because this is an invite-only event! 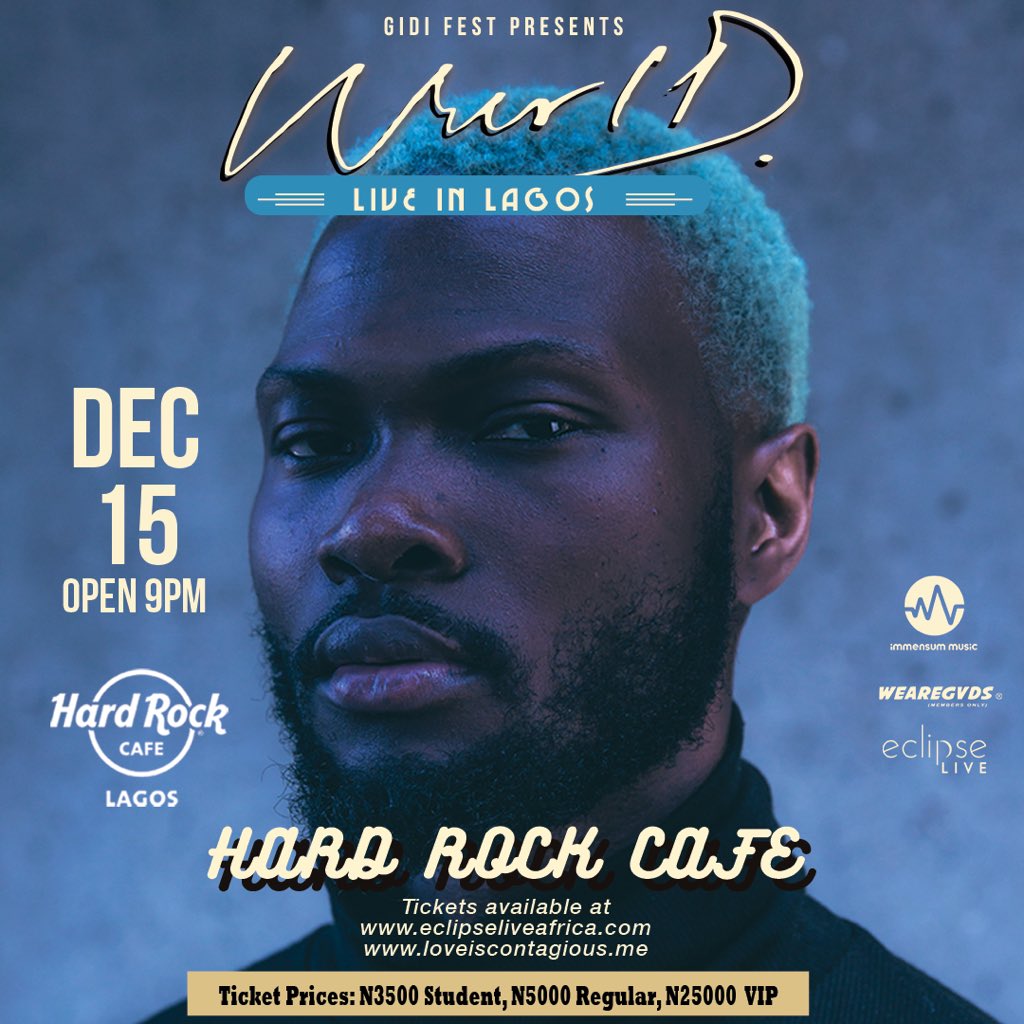 The blond singer who’s having the year of his life will headline his Lagos show.

After another year at the top of his career and playing amazing sets all over the world, DJ Spinall is bringing his Party of Your Dreams to Lagos once again.

Budget: You have to RSVP here.

Teni’s The Billionaire Experience at Eko Hotel and Suites

Poolside with Shakkar at Landmark Towers

Come hang out with the good people from Shakkar Shades.

After Donli’s most successful year commercially, she will host a live show in Lagos, expanding the Enjoyment ministry.

Pretty Boy D-O returns and he may be bringing some surprise guests out!

Budget: Standard Tickets at N5K and Tables/Cabanas are available at N100k and N250k. Buy here

Grown and Sexy at Eko Hotel

An opportunity to engage with the best streetwear brands that Lagos has to offer.

On the 26th, they’ll be at the Moist Beach Club.

Zlatan will be rounding up his year as the busiest man in Nigerian music with a headline concert.

Santi’s No Tears In The Jungle, Hard Rock Cafe

Santi’s 2019 album, Mandy and the Jungle put him on the world map and took he and the Monster Boys across the globe for performances in Europe and the US including a London headline show. He returns with No Tears in the Jungle for the day ones.

DJ Tunez is bringing his Blackout party to Lagos for the second time.

Something for those yearning for days long gone

The Land returns. Guaranteed to be a good mix of your mainstream stars and best rising acts! And a stage dedicated to promoting female artists.

An appropriation of the American festival with a very vague notion of what it intends to do.

Budget: Early Bird Tickets are going for N1,500 while tickets at the venue will cost N2,000.

As part of the festivities to mark its 15th anniversary, Flytime Promotions is taking residency at Eko Hotel for a couple of days and curating different experiences. Rhythm Unplugged, its signature franchise will take precedence with Mase, Burna Boy and Koffee headlining.

Day 2 of the Flytime Festival is targeted at the oldies with Boyz II Men headlining.

An event seeking to build on the return of the IJGB community.

Fun Central Park hosts its 3rd Christmas Village experience targeted at the parents amongst us. It’ll take place for 2 days. 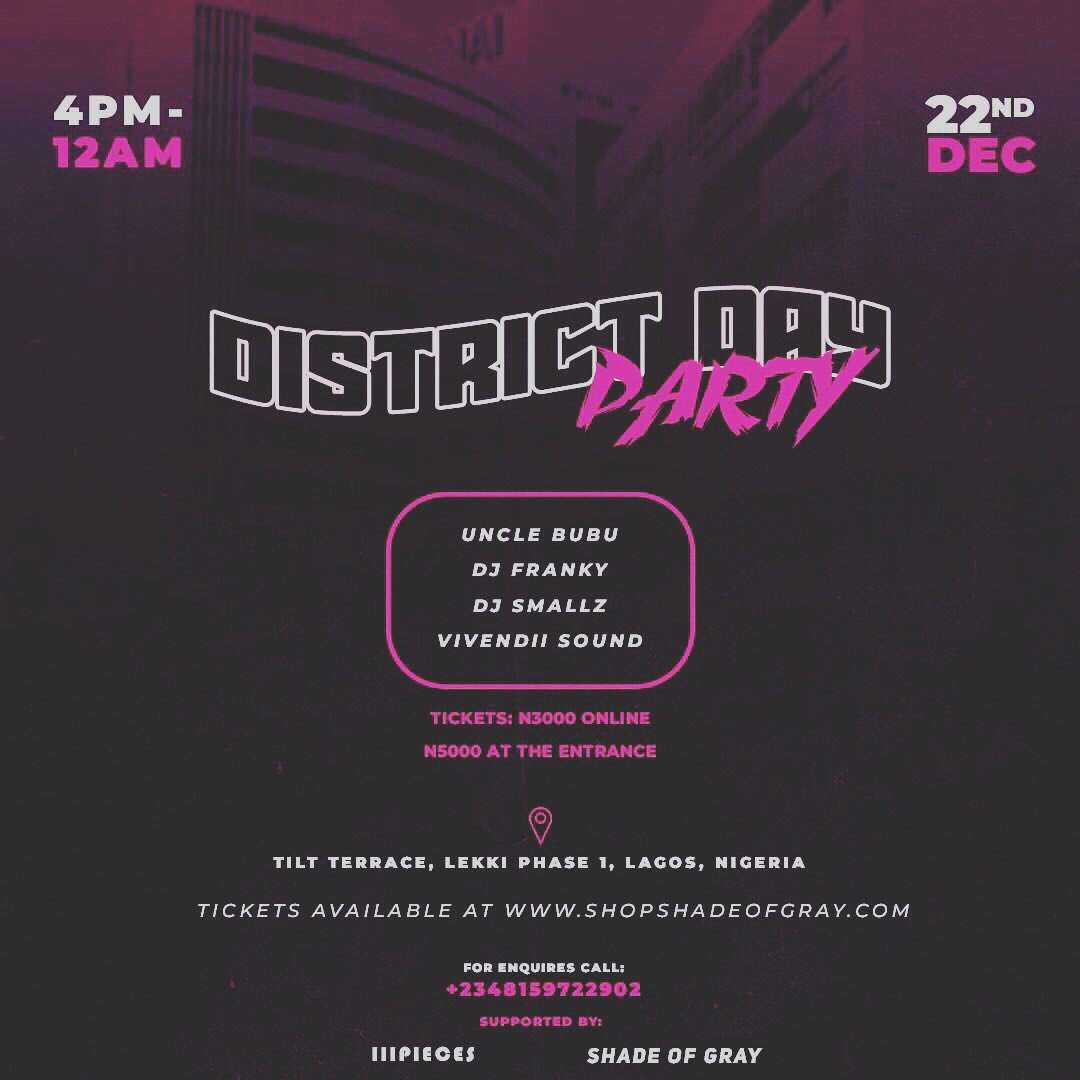 The District Day Party is setting out to to create a different vibe from the usual in Lagos. In what would be its second iteration, fun seekers are invited to come in and party into the night time.

The hottest female rapper in the world right now is bringing those legendary knees to Lagos! You’ve used the lingo all year, now it’s time to see if you’re really the hottest out there!

The youth-run and curated exhibition designed to highlight and support the businesses, projects, and careers of young Nigerian creatives and entrepreneurs is back for the second year in a row.

Everything Savage at Eko Hotel

Tiwa Savage has been top of the game for the past three or four years so it’s surprising that this is her first headline show in Lagos, but it is!

Queen Moremi The Musical at the Lagos Continental Hotel

A 90 minute musical that tells the story of one of the Yoruba nation’s forebears. Will be on twice daily till the 2nd of January.

The singer returns with his annual show on the back of a 2019 album.

LOCA at Circa Non Pareil

The Beat Group introduce themselves to the Lagos market with LOCA.

The African Giant headlines a rare show on the Homefront as Day 5 of the Flytime Music Festival.

Cool FM comes through with an event for the season with a line up featuring the likes of Tope Alabi, Onos, Eben and British Gospel Rapper, Guvna B.

On the Runway with PIECES* at The Lekki Special Events Centre

Budding brand, PIECES* will host a showcase of their upcoming work!

After a year spent touring the far reaches of the earth, Kizz Daniel returns home to close the year out with a concert.

The city’s premier food festival will reappear for its second two-day iteration with some improved elements.

The Wizrd is set to pull up in Lagos!