Success of the previously maligned

It’s often said that the devil you know is better than the angel you don’t and this is a charge that has been levelled at the football industry. The same managers are often discussed whenever jobs become available when it can be argued that they have been categorical failures. Alex McLeish took Birmingham City down playing an unattractive brand of football and won a Cup final that was more testament to Arsenal’s inadequacies than his genius and found himself in a job without even flinching. Mark Hughes, Tony Pulis and Steve Bruce could also have suffered from similar criticism. Hughes’ spell at Queens Park Rangers was absolutely horrendous (something Joey Barton would not hesitate to remind you of). Bruce was hauled out of Sunderland as a result of his Geordie past and some bad results. Stoke fans became bored of Pulis’ tactics and it also didn’t help that clubs who spent less had fared way better. This season, it could be said that all three have proved their worth. Hughes has got Stoke playing a more expansive brand of football and seen them register wins against Chelsea, Arsenal and Manchester United. Pulis and Bruce are candidates for Manager of the Year. At no stage this season have Hull, a team tipped to head back straight to the championship been remotely worried. The sore point of their season has stemmed more from the clash between their owner and the fans over a change of name. Being in the FA Cup final guarantees a day out for the fans and provides a lesser club like Hull, a shot at silverware. Bruce, a man who had previously been described as a “dinosaur” has shown himself willing to adapt with his three centre backs formation that saw them hold one of the best home defensive records whilst his strike force of Nikica Jelavic and Shane Long has registered success this season. Helping Tom Huddlestone rediscover form has also been a high point.

Pulis has taken a team that looked so dire in the first weeks of the season that their relegation was a foregone conclusion, drilled them on the training ground and created a strong unit that can cede the ball to stronger opponents and be sure that they can still win buoyed by the counter attacking strengths of the likes of Yannick Bolasie and Jason Puncheon. In Mile Jedinak, he also has one of the most underrated midfielders in the league.

Perhaps, we should judge a bit less and understand that some of those men who keep getting jobs, do know a thing or two.

The resurrection of Peter Odemwingie

By jumping the gun on his prospective transfer to Queens Park Rangers, Osaze Odemwingie ensured he would go down in Transfer deadline day folklore. This did him a disservice in that it altered drastically the narrative that should surround his time in England. Instead of being hailed as a talisman of what had been until his arrival a yo-yo club, he’s remembered as a troublesome, mercenary character. It also didn’t do him any credit that he had been dropped from the Nigerian team that were marching on to victory in the African Championships. Whilst at Albion, Odemwingie scored 30 goals in 87 games. Slightly more than a goal every three games at a lower half team is a pretty respectable haul. Three of those goals coming in one Black County Derby. In the wake of his position at Albion becoming untenable, he left for Cardiff in what will ultimately be a very forgettable spell. Come January, as Ole Gunnar Solskjaer sought to make his mark on Cardiff he traded him to Stoke City for Kenwyne Jones. Stoke won. Odemwingie’s directness has helped them in overcoming their propensity  for what Arsene Wenger calls “sterile domination”. Cardiff, barring any drastic changes would be playing in the lower division next season. It is also likely he would win his place back in the Nigerian team too.

Prolific substitutes are always feted. Throughout their careers, Kanu Nwankwo and Ole Gunnar Solskjær were adored for their abilities to read games from the bench and exploit them upon coming on. This led to people predicting that they would make great careers as coaches. Kanu is back in Nigeria continuing his charity work whilst Solskjær was hailed as a possible replacement for Fergie after winning two league titles with Molde in the Norwegian League. Taking the Cardiff job raised some red flags considering the odd marriage between a Ferguson acolyte and an intervening Owner in Vincent Tan. Solskjær was lucky to get the job as the January transfer window opened so he could make his own signings. However, he has taken a team that was 17th to 19th earning 0.61 points per game. The baby faced assassin has failed  to live up to the hype.

Arsenal and Manchester United were foolish not to sign Yohan Cabaye


In the summer, both Arsenal and Manchester United were in for central midfielders but their managers chose to opt for the familiar. Arsene Wenger opted to re-sign Matthieu Flamini after failing in his pursuit of Luiz Gustavo and Lars Bender whilst David Moyes unsuccessful in his pursuit of Thiago Alcantara, Ander Herrera and Cesc Fabregas (HAHAHAHA!) ended up paying more than Marouane Fellaini’s release clause.

Flash back to the first weekend of the season when Yohan Cabaye downed his tools after Arsenal made a low ball offer. Cabaye would end up moving to Paris Saint Germain in the January window and I can’t help but feel that the paths of both Arsenal and United could have been significantly different had they made greater effort to buy the Frenchman. Cabaye is a great midfielder. He’s got a good passing range, can play behind the striker and as an anchor. He’s proficient at set pieces, ball retention and can also crack a good shot. These are all things both clubs lacked.

Had Arsenal made the extra effort to buy Cabaye, it is more likely than not that they won’t have struggled as they did at Anfield whilst Flamini was suspended. He might have been a great interchangeable option with Mikel Arteta who can look amazing against 15 of the 20 League Teams but lacks the legs for the big games (Arsenal tend to lose when opponents target Arteta). N.B The fact that an Arteta replacement is one of their transfer priorities highlights how important a new midfielder is. It might also have meant that the loss of  the goals and assists of Jack Wilshere, Mesut Özil, Aaron Ramsey and Theo Walcott would have been better absorbed. Cabaye being French and having already adapted to the English game and culture would also have meant he would have fit the Arsenal ethos like a glove.

Over the weekend, Match of the Day released a graphic that was ready made for those who love to troll United fans. Find it below; 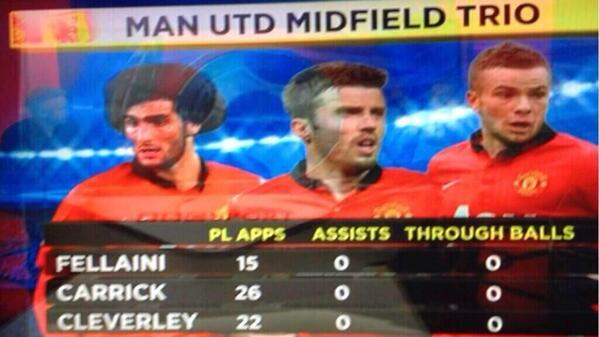 This season whilst at Newcastle, Cabaye scored 7 times (one of them a winner against United) and assisted twice in the League. And he wasn’t servicing Robin van Persie or Wayne Rooney. The Frenchman also created 33 chances. Contrast this to Fellaini’s 3, Cleverley’s 10 and Carrick’s 23.

At PSG, his appearances have been start stop and one can’t help but note that it was criminal on the part of the Premier League sides to let him leave these shores without putting up a fight. Newcastle’s struggles in his departure only serve to highlight how great a player he is.


Goals of the season