Brendan Rodgers is a funny man. Sometimes, he comes across as one of those people who use words they don’t understand in a bid to sound clever.  He can condescend sometimes as he did when he remarked whilst at Swansea that  “It is great for the public here at Sunderland to see us. They must have been wondering what this team everyone is talking about are all about and now they have seen.” Northerners live in a foreign world, you know. They don’t get Match of the Day or Sky and their only source of amusement comes when the Swansea circus are in town. Then there were those envelopes on the ‘Being Liverpool’ documentary. You see, even though Mr. Rodgers has done a good job in trying to get me to dislike him and dismiss his achievements, he has failed (I’m very forgiving like that). Brendan Rodgers is the manager of the season. Here are a couple of reasons why;

1) Developmental Coaching: For me, the most important part of being a coach is improving the players at your disposal. Arsene Wenger and Pep Guardiola are the gods of developmental coaching. Wenger’s work includes aiding the evolution of Thierry Henry and Robin van Persie from inconsistent wingers to two of the most fearsome strikers of our generation. Pep Guardiola’s work with Pedro and Sergio Busquets where they made the transformation from Barcelona B players to World Cup winners within two seasons is also remarkable. Under the Northern Irishman’s tutelage, Daniel Sturridge whose promise  was  as equally matched as his arrogance bordering on petulance is beginning to look like the  best England striker since Michael Owen who’s not named Wayne Rooney. His goal scoring rate this season has matched the Ronaldo’s and Messi’s. There has been some element of fortune with Jordan Henderson but that doesn’t detract from the fact that he has been one of the shining lights this season. Another Rodgers student,  Raheem Sterling whose reputation was beginning to soar more for goals scored in the bedroom has improved greatly in the second term of the season and is surely a shoo in for England’s Brazilian Summer holiday. 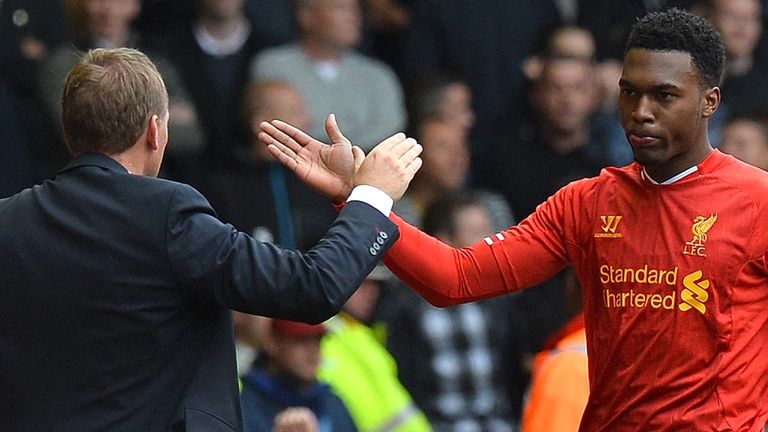 2) Tactical flexibility: Journalist Miguel Delaney suggests that this Liverpool side are playing the most pure football since Arsenal 1997/1998 and he might have a point. Rodgers made his name for the tiki-taka model at Swansea but he seems to have honed his tactical awareness with his Liverpool side looking the most tactically complete team this side of the world. In the first half of the season, they played with three at the back to sustain the Suarez and Sturridge adulation. That period also tallied with a bit of a “sit tight and take our chances when we get them” efficiency model.  These days, they’re pressing high and turned in two of the performances of the season in their annihilation of both North London teams. In the wake of Lucas’s injury, Steven Gerrard has moved to a Xabi Alonso style role at the base of the midfield and despite initially struggling is currently enjoying a purple patch. By building his front line around some of the paciest forwards around, is it any surprise that they have won the most penalties in the league this season? (9) .

3)Points Swing: When was the last time you saw a team go from 7th in one season to the top 4 in the next? Just as dramatic as rivals’ Manchester United’s fall has been, Liverpool’s progress has been as impressive. Champions, United finished above them by 28 points last season. The Scousers are 14 points clear, at present. They’ve been buoyed by not having to play in the grueling Europa League and it must be said, their likely return to the Champions league for the first time in 4 years makes that seem like a very sensible move. One step back, two steps forward. Whilst it obviously won’t help their coefficients were they to get there, Tottenham might want to take a leaf from their book.

4) Taking a no nonsense approach with Luis Suarez: Suarez’s season has been a slap in the face of those who argue that in an era of player power, it’s always in the best interest of the club to get rid of wantaway players. In the summer, Suarez made no secret of his desire to push for a transfer away. There were those quotes when he returned to Uruguay. There was also the ill advised interview with the Telegraph and Guardian when Arsenal’s ’40 million +1′ became public knowledge. Rodgers was helped by a strong owner in John Henry who played hardball. He fined the player and made him train with the reserves. Having Steven Gerrard talk to him was also a wise move. When the season begun and Liverpool flourished in the wake of the Uruguayan’s suspension, Suarez’s ego was checked and he had to humble himself and prove himself worthy. As the season winds down and with a new contract in tow, everyone’s won.